The reception of products from wood by its exposure to high temperature refers to one of the most ancient technologies in the humankind history. The archeological excavations prove that cavement knew about the charcoal.

It was collected at site of fire or made specially by filling up smoldering firebrands with ash and used them as fuel that does not generate coal gas when sheltering from bad weather in caves. The first metal was melted propably accidentally, when stones laid around the fireplace with live coal turned to be ore. Starting from the Bronze Age, the charcoal became one of the grounds for the developing civilization. Blacksmiths could receive the coal for own needs even in XV-XVI centuries. Until the mid-XIX century the metallurgy developed considerably on the basis of the charcoal.

The actual European countries, mainly, England and France lost their forests by spending them for charring. The metallurgy of our “rock belt” – the Urals recovered on the basis of the charcoal.

Today Brazil is the leader in the manufacture of high-quality cast iron and used the charcoal as a reducer. It is used in a score of technologies and various life domains. The unique feature of the charcoal – the absence of carbon monoxide in combustion products – made it a preferred type of fuel in most cases. In the previous publication, the author has already stated that the use of the charcoal in the agriculture in the developed countries has increased intensively over the last years. Experts connect its use with the new “green revolution” – next breakthrough to the intensification of agricultural products manufacture.

HOW IS THE CHARCOAL MADE?

The selection of the charcoal manufacture method shall be based on forecast of the market competition and consideration of the feedstock factors. The firmware is developed on the basis of knowledge of the flowing process essence and economic comparison of equipment options. Different process solutions are in demand in different economic conditions. There is an answer behind the question: “What is the need for creating new equipment if so many charring equipment exists?” The critical moment is requirements placed by consumers to the product. The coal quality criterion in our country before was GOST 7657-84, which established the requirements for various coal grades. This GOST was developed when the main and almost the only consumers of the charcoal were the metallurgy and active coal production. Today more than a half of this product is used in everyday life (for example, for making shashlik outdoors).

The high content of solid carbon and low ash content of the charcoal were required for the industry using it. The main consumers were satisfied with the high content of fines. Today the structure of the demand and technologies have changed. For domestic purposes, larger coal containing a sufficient quanity of volatiles was requried as it burns up better.
A vertical retort was state of the art in charring during the second half of XX century. This is actually one of the most improved charring devcies. However, vertical retorts were created for commercial coal consumption and the quality of products produced by them do not comply completely with domestic needs. Other examples explaining the necessity for developing new design solutions in the dynamic environment may be also given. We propose the readers to consider the scheme developed by the author (Fig. 1), which has already became popular in mass media and Internet. The goal of this scheme is to show that the experience by several generations of charcoal burners allows selecting consciously a process solution option. The selection stopped being the result of flash of genius. Today there is enough information enabling to calculate competently the hydraulics and heat transfer, mass exchange processes and to design equipment.

The problem of charring equipment environmental friendliness should be considered separately. Sometimes magazines and newspapers state that the charring process cannot be environmentally friendly at all. Journalists that do not understand the issue receive such information from ignorant coal producers and spread it in mass media. Owners and producers of all kinds of “environmentally dirty” devices sometimes refer to the following conclusion: like, the coal has been made in heaps, pits from time eternal and nothis has happened. It is well known that men servicing these heaps in the Demidovs’ age died at young age. Simply nobody determined the cause of this or that bondman. The population in the territories where the coal was produced at that time was incomparably less than now. And the harm caused to the environment was less evident. In addition, the relation of charcoal burner work and loss of the surrounding forests was not clear yet.

Charcoal formation is the separation of low-molecular compounds from substances making the wood. The carbon concentration increases in the solid residue. Oxygen and hydrogen contained in the wood substances are removed together with volatiles. The carbon is also removed. The carbon content in the volatiles is less than in the feed wood. As a result, the solid residue of pyrolysis is about one third of the feed wood weight, but it contains about half of carbon in the wood. An example of the element distribution in the feed wood and decomposition products is given in Table 1. The data is given in terms of the absolute dry wood. Such wood is absent, but this notion i convenient for calculations. To calculate using the actual moisture content, it is sufficient to add a known water share.

When comparing the data in Tables 1 and 2, one can see the method for decreasing considerably (approximately by one fourth) the coal yield when increasing the non-volatile carbon content. It may concluded hat the coal should be calcinated only to the degree required by the client. The calcination resulted in coal reception with a higher content of the non-volatile carbon is detrimental due to the larger duration of the process and decrease in the coal yield. The coal yield increases slightly if the process is slow. However, the data on the yield at a level of 60 % sometimes occur and this is clear misunderstanding. The duration of the wood decomposition process with the separation of volatile compounds and the carbon residue formation is usually from several seconds to several minutes. The process duration making several hours depends exclusively on the heat transfer conditions. The coal formation under the influence of heat is a complex process. Its stages are sketched in Fig. 2.

Author of this article: Yuriy Yudkevich, PhD in Technical Sciences This material was published upon authorization of the author’s daughter. 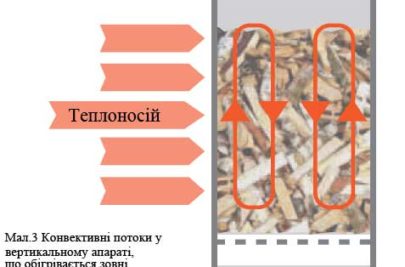